Crypto Market is Bleeding: Why is it Happening and What Coins to Invest into?

Currencies are a strange beast in financial markets.

The forex market is the biggest globally, with trillions of dollars traded around the clock, but there’s no central marketplace.

You always trade ‘over the counter’ with your bank or broker if you trade forex. It is possible that at the same time, someone else is dealing in the same currency as you via another institution at a different price.

Because of the size of the market, and because many banks and specialized brokers are publishing quotes on various currencies 24 hours a day, the effect (or arbitrage) is that all the quotes of the banks and brokers are consistently close.

Because of their deep liquidity, forex markets are ‘willing victims’ for chartists as they truly reflect the general psychology of the trading public. Therefore, the price moves on forex charts result from the buying and selling of millions of traders worldwide.

Currency pairs are not twins

When we talk about the Euro, the US dollar, or the Yen, in reality, we are only talking about half of a pair of currencies. Any currency is always expressed VERSUS another currency.

To be correct, we should also state the other half of the currency pair, for example, EURUSD or USDJPY. However, the presence of USD is implied, so we shorten these two pairs to simply the Euro or Yen.

Essentially, currency pairs are relative strength measures The market has, over the years, come to a convention for referencing various forex pairs. We call the most important pairs the ‘majors’.

They all have USD on one side. The majors typically have the lowest spread and are the most liquid pairs. Those in bold below are the majors, and the entire group is called the G10.

When trading two currencies not involving the USD – e.g. EURJPY, EURSEK. We call them ‘crosses’ as they go across the USD, and liquidity varies for these pairs.

Some pairs are upside down

In some pairs, the USD is the numerator, while in others, it is the denominator.

The numerator is the top of a fraction or ratio, and the denominator is the bottom or devisor.

For example, when both the EUR and JPY are appreciating against the USD, the EURUSD graph will show a rising trend while USDJPY will show a falling trend. If we combine the two, we have EUR/JPY cross rate.

However, because one currency can have so many different prices in various other currencies, keeping a high-level overview of general trends in these markets is challenging.

This is where Relative Rotation Graphs™ comes in, which I use extensively in my educational webinars at FXChoice.

They help you get a high-level overview of a lot of securities (in this case, currencies) related to each other. RRG charts need a benchmark, security, or an index that serves as the center of the chart – an anchor.

For US stock sectors, for example, we often use the S&P 500 index as this anchor. For currencies, it is a bit different.  Currency pairs are already a relative relationship in and of themselves, so the denominator for the pair is its benchmark.

To get a proper RRG, we need to create a universe of currency pairs that are all denominated in the same currency.

It makes sense for a US Dollar-based investor to set up a universe of currencies all denominated in USD. A Euro-based investor could use the EUR as their benchmark.

Professional traders use RRG charts on their Bloomberg or Eikon terminal to see all the currencies they are interested in relative to their benchmark (say the USD).

This results in a scattergram.

RRG charts also have ‘tails’, which show where the currencies were in the chart and how they are moving in the matrix.

The top-right quadrant is called Leading as its currencies are outperforming the benchmark and have positive momentum -looking and likely to get better.

The bottom-right quadrant is called Weakening, as its currencies are outperforming the benchmark but are losing positive momentum.

The bottom left-hand quadrant is called Lagging as its currencies are underperforming the benchmark without positive momentum.

Finally, the top left-hand quadrant is called Improving as its currencies are underperforming the benchmark but have positive momentum. This quadrant is the most interesting for many. It may show you the next big theme in the market.

RRG charts have something extra which helps chartists see the direction of travel of this relative performance/momentum of the relative relationship. You can choose the periods of the samples.

In the chart below, the period is days. The ‘tail’ is the direction of travel over the last five days. You can see that the ‘best’ looking currencies are heading North East – they are increasing relative performance and positive momentum.

Therefore, the ‘ultimate’ currency pair is to be long one that is headed North East and pair it with one headed South West. 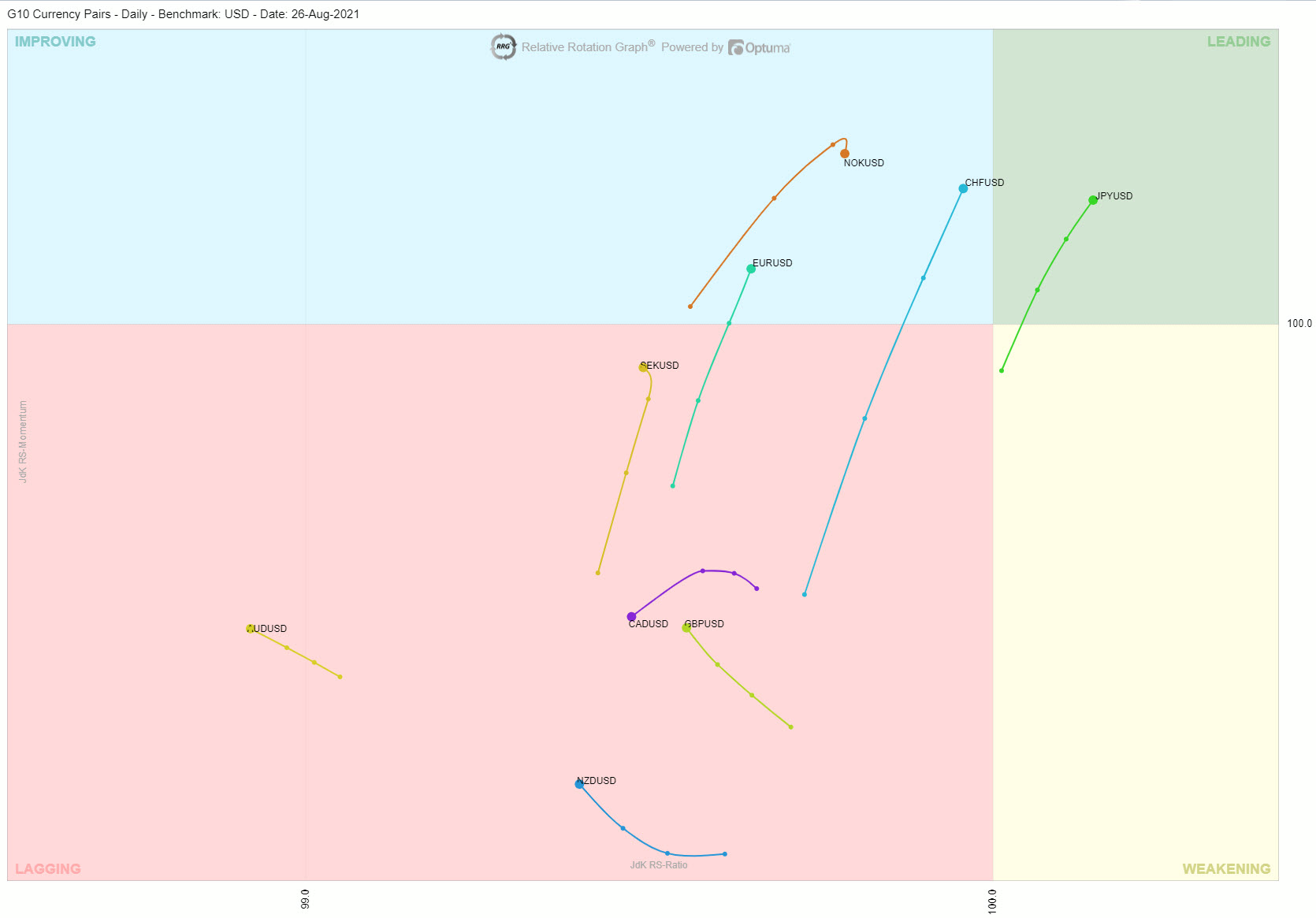 Look at the RRG graph above. Which pair would you want to have?

The currency going NE and furthermost to the right on the chart – the best performer and with increasing momentum is JPYUSD. It is outperforming the USD benchmark with increasing positive relative momentum.  So it is good, and the trajectory of the ‘tail’ indicates it will be better.

So with what to pair it?

The AUDUSD is far to the left and rising slightly. This is underpforming the USD. The CADUSD is heading SW but is not so far left on the RRG chart.

The next step is to look at the regular chart of each. Is one more attractive than the other on these charts? Is there support ahead?

Looking at the AUDJPY chart below, we can see it has fallen to 78 and bounced strongly. The RSI has broken up from its downtrend. We can see the improving momentum in this weak currency pair. 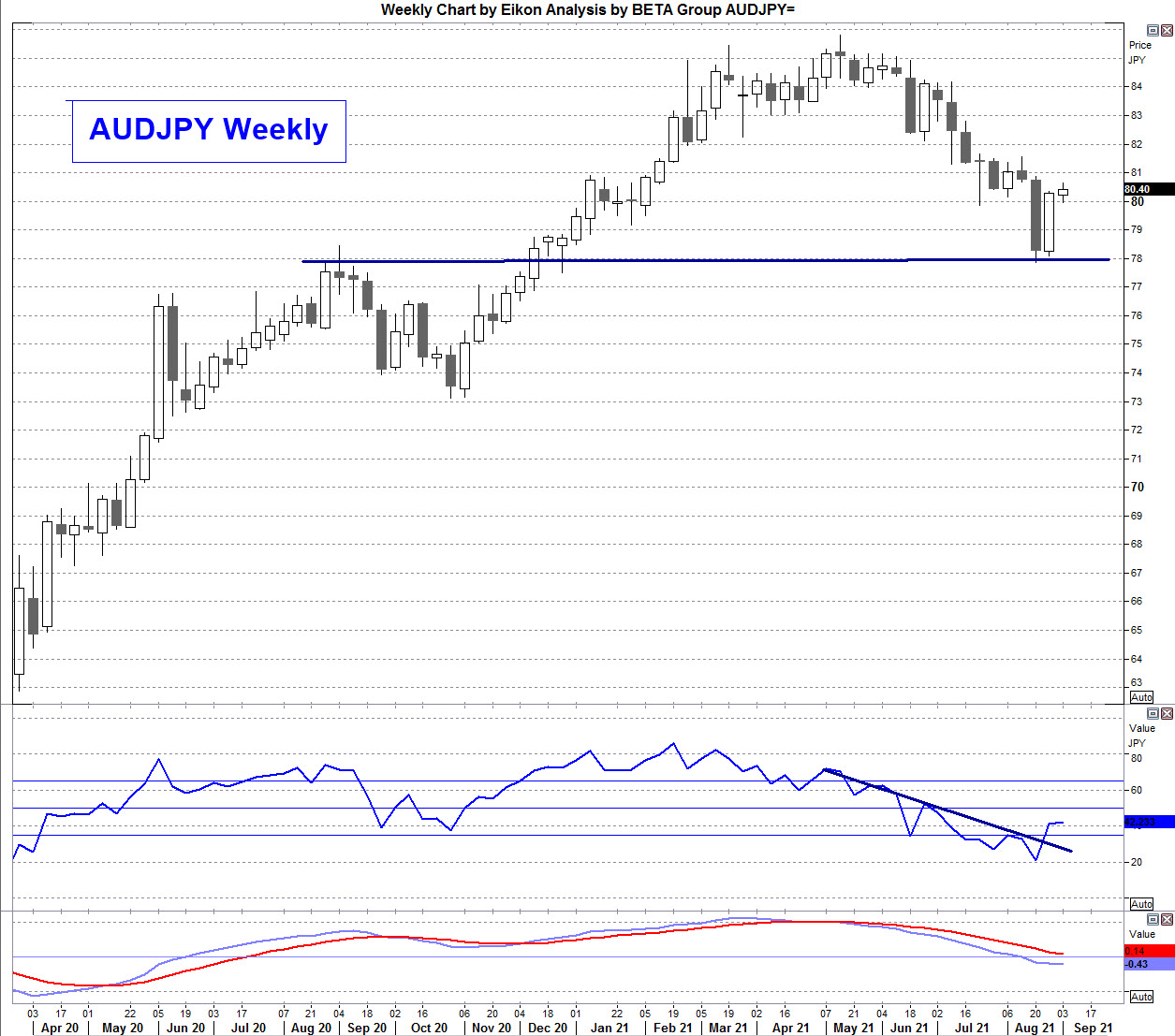 Some may see a potential Head and Shoulder pattern in the CADJPY below. They may see that support is much lower here, at around 82. 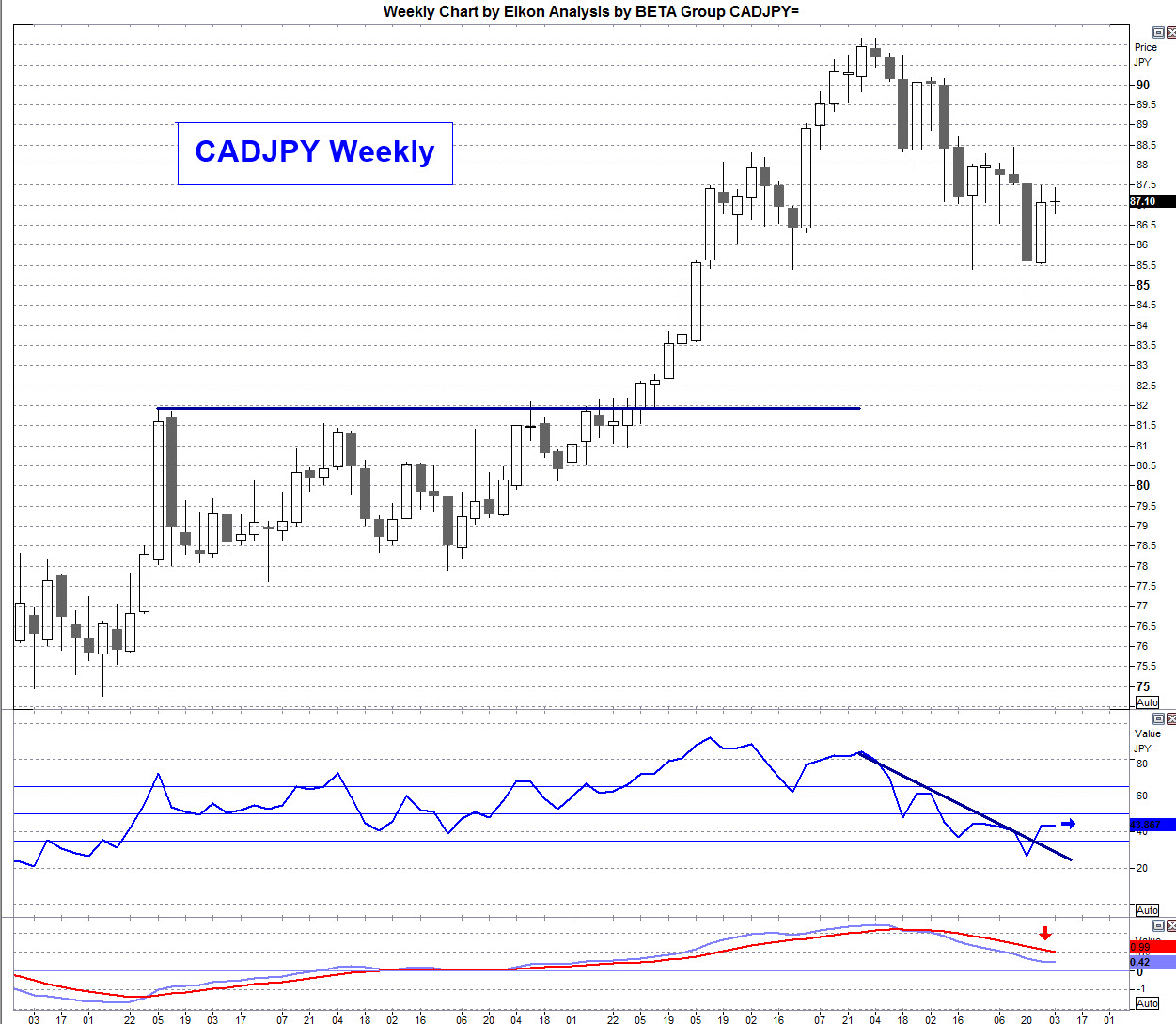 You must decide for yourself, but I know which I would choose. But would you have been able to instantly analyze all the G10 currencies versus each other in one chart?

BestChange.com – A New Way to Find Out Reliable Cryptocurrency Exchangers for Your Desired Trading Pairs

Do You Really Need 10,000 Hours of Practice To Be A Profitable Trader?