Reddit Moons Explained – How Do You Get Moons & Are They Worth It? [2021 Edition]
Advertisement

Polygon(MATIC) Price Could Have Plunged 10x To Go Beyond $3, But This Happened!

Shiba-Inu is Oscillating Within a Continuation Pattern, Where Will SHIB Price Head Next?

Why is This Last Chance to Buy Ethereum? ETH Price Posied For $20k!
Home » De-Fi » Reddit Moons Explained – How Do You Get Moons & Are They Worth It? [2021 Edition] 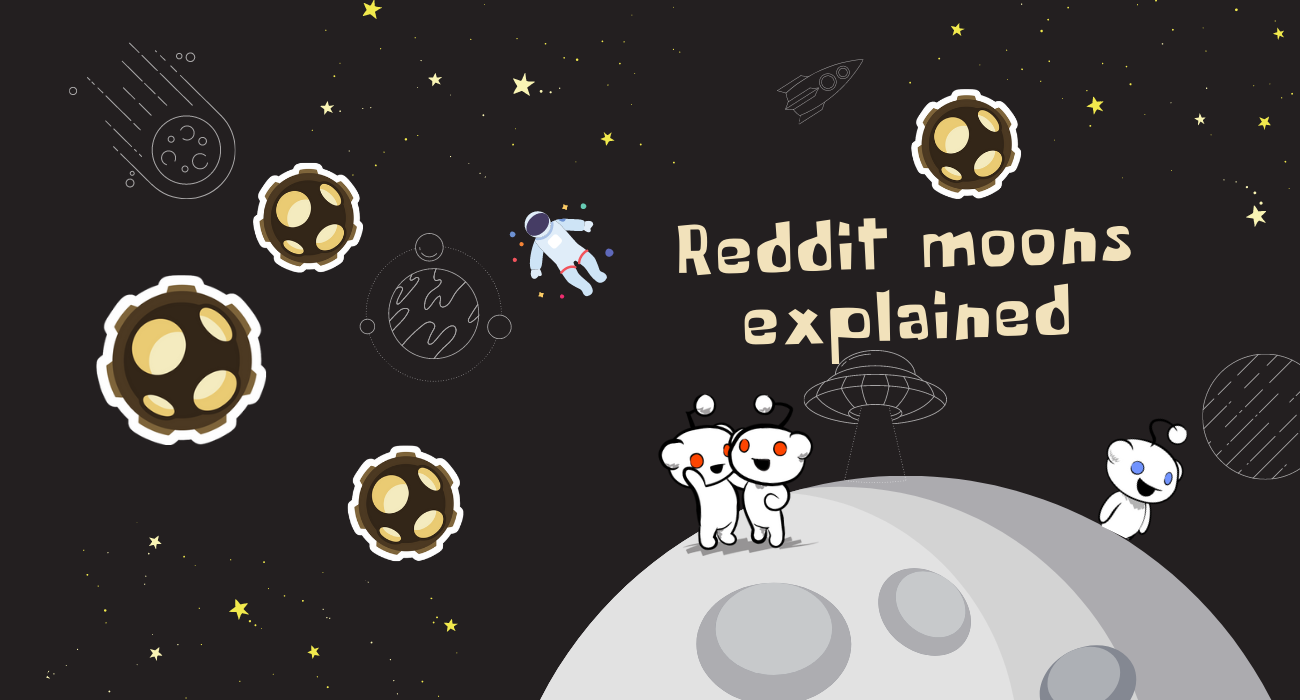 In May 2020, Reddit introduced a new feature called Reddit Community Points (RPCs) in order to reward its users with crypto tokens that, unlike karma points, have a monetary value. RPCs are Ethereum tokens that can be used across a limited number of subreddits.

While Reddit is completely centralized, the RPCs they integrated can be compared to Hive and Steemit because they are decentralized.  Content creators are rewarded for their content and a part of the reward goes to curators to make the discussions within the community even more valuable. The RPCs , like their counterparts on the Hive and Steemit blockchains are distributed fairly among the subreddit users.

Because the moon contract was deployed to the Rinkeby testnet Ethereum network, the moon token didn’t have any actual value.

However, the goal of Reddit is to successfully transfer moons on the Ethereum mainnet.

Reddit’s developers created the smart contracts for the RCPs and the rules of their execution. The code went live on the Ethereum blockchain after being audited and reviewed. Since RPCs are Ethereum tokens, users will have to pay for gas fees with each transaction they make.

Moons are distributed monthly according to each user’s contributions within the r/Cryptocurrency community(posts,comments,etc..). Users will earn moons based on the karma points they accumulated during each month, but the final decision is up to the community.

In order to check the current price of the Moon token, visit https://www.coingecko.com/en/coins/moon

Converting MOON into DAI (and USD)

Transfer your Moons from the Reddit Vault to your Metamask wallet:

In order to transfer your Moons to metamask, you need to get the recovery phrase provided in your vault. You can access your vault in your Reddit mobile app.

Now proceed to make your vault by pressing on your profile picture and pressing “vault” on the menu.

Reddit will ask you whether you would like to make a reddit backup of your vault or a manual backup. Feel free to choose any of those options.

In case you choose the “manual backup” option, make sure to save the 12-word recovery key that will be displayed.

You could even have made as much as 100x which means you could have turned $100 into as much as 10k.
Experts believe this will happen again in 2021, the only question is which coin do you bet on?
My friend and cryptocurrency expert Dirk is personally betting on 3 under-the-radar cryptocurrencies for huge ROI in 2021..
Click here to learn what these coins are (watch till the end of the presentation).

Once you have your recovery phrase copied, goto your Metamask wallet and select the “Import account” option.

You will now be prompted to enter in your 12-word Reddit vault recovery key you saved earlier.

Once you have entered it, switch networks on Metamask from the “Ethereum network” to “ Rinkeby testnet”.

Please note that your moons won’t be immediately visible, you still need to add the Moon token as a custom token on Metamask.

Seeing your Moons in your Metamask wallet:

In order to see and track your Moon balances, click the “add token option in the bottom left corner of your wallet.

Proceed with adding the Moon token by specifying its contract address, symbol and decimals of precision: 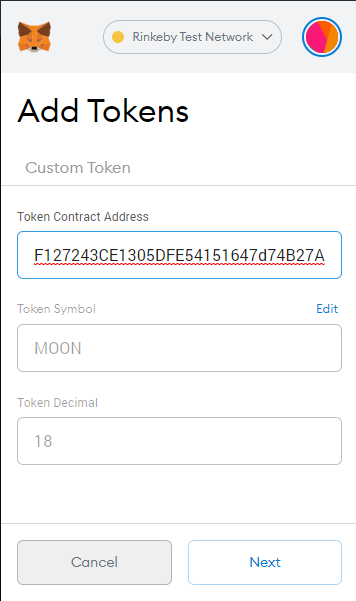 Once you have added the token, you will be able to see your Moon balance appear.

Set up the xDai network in your Metamask wallet:

To start using the xDai network on Metamask, click on the network menu and select “Custom RPC” then enter these details:

In order to pay the fees on the xDai network, you will need some xDai. You can use a Dai to xDai bridge to get some:

Since you will be selling your xMOON for xDai, you’ll first have to convert your MOON into xMOON:

We’re almost there! Lastly, you need to swap your xDai to Dai using the bridge we used earlier. Please note that it will take some time for your Dai to show up in your Metamask wallet. The transaction  usually takes one hour but it may take longer depending on the network condition.

Awesome! Now you have successfully swapped your moons into Ethereum mainnet tokens.

RPCs such as moons are stored in a “vault” which is basically an Ethereum cryptocurrency wallet embedded in Reddit users’ accounts. This vault stores Ethereum tokens that can be spent on subreddits that support the community points feature. Currently, there are only two subreddits that have introduced this feature: r/Cryptocurrency with their MOON token and /r/FortNiteBR’s Brick token.

Like most cryptocurrency wallets, these vaults generate a public address to store the m

oons, and a private key, which makes them accessible by the user.

Why Does MOON Have Value?

When moons were first introduced to the r/Cryptocurrency subreddit, 50 million moons were distributed based on the karma points of users. The amount distributed per month started at 5 million and decreases by 2.5% in each cycle. The maximum supply of moons distributed will be close to 250 million.

On September the 22nd 2020, a new thread on  r/Cryptocurrency called “New Moons feature – convert to Coins!” explained how users can convert their moons into Reddit coins. These Reddit coins are used in Reddit to award posts and comments and can be purchased with fiat money.

Since moons can be converted for reddit coins that have actual value, the moon tokens became valuable as well.  This allowed moons to be adopted by various exchanges even though they are a testnet cryptocurrency.

Moreover, whenever r/Cryptocurrency users spend their moons on Reddit, they get removed from circulation. That means that the number of moons available for users will decline over time, which will eventually increase the value of the remaining MOON tokens.

However, half of all the burned moons will be back in circulation the upcoming month, to ensure that there will still be moons for distribution even after the token reaches its maximum supply.

You can spend your moons on the r/Cryptocurrency subreddit to unlock some exclusive features such as badges and GIFs in comments. Moons are also used to add weight to your vote on polls.

Add to that, you can convert moons to Reddit coins to award posts and comments  on the r/Cryptocurrency subreddit only.

Moreover, you can buy a special membership on the subreddit for 1000 coins per month.

Furthermore, you convert your moons to DAI like we showed you earlier and earn interest on them using a DeFi protocol or sell them for fiat money on exchanges such as Binance and Coinbase.

Finally, in case you believe in the power of Reddit communities and the r/Cryptocurrency subreddit especially, you can hold your tokens and sell them after they reach their maximum supply.

Why Should I Use MOON?

You should use the MOON token if you are interested in the r/Cryptocurrency subreddit and want to maintain the subreddit and grow your reputation there.

If you are a reddit user who enjoys posting and commenting on this subreddit, you can do so and get rewarded for it. All you need to do is to create a vault in order to claim the moons you have earned.

Yes, since reddit moons can be used for buying reddit coins which can be purchased using fiat money, they have inherited a monetary value. You can check the current MOON token price here .

You can get reddit moons by being active on r/Cryptocurrency. In case you aren’t an active user in reddit, try to post more often and contribute on other subreddits until you reach 500 comment karma which is the minimum comment karma required for posting on the subreddit.

Post quality content regularly and grow the discussions by commenting on others’ posts. You can also buy reddit moons with Dai. To do so, you’ll need to do the same steps we covered earlier, but in reverse.

Is MOON coin a good investment?

Like most other cryptocurrencies, MOON has a maximum supply and by the time the token reaches it, its price is expected to grow. Of course, like many altcoins, its price can be highly influenced by the Bitcoin price movements. But in general, the MOON token’s value is based on the community. r/Cryptocurrency is one of the biggest subreddits on reddit and has a very active community that is highly likely to grow even bigger over time, which will increase the demand for the token and make it more valuable.

MOON is a good investment in case you believe in the power of this community. But, even if you want to invest in it, you need to remember that moons are still a testnet cryptocurrency which makes them less likely to be listed on popular exchanges or DEXs and hinders their ability to make huge gains for investors.

Add to that, MOONs don’t have strong fundamentals like many popular crypto projects such as Ethereum, Solana and Polkadot so beware when you invest in it and try not to allocate too much of your portfolio for this token (10-15% should be more than enough).

What is MOON crypto worth?

The MOON token is worth $0.17 in the time of writing this article. Recently this year, the token’s price surpassed dogecoin price, which was an impressive takeover. We don’t know how much this token will be worth in the future, but hopefully its price will increase due to the limited supply and huge community support behind the token.

CaptainAltcoin’s writers and guest post authors may or may not have a vested interest in any of the mentioned projects and businesses. None of the content on CaptainAltcoin is investment advice nor is it a replacement for advice from a certified financial planner. The views expressed in this article are those of the author and do not necessarily reflect the official policy or position of CaptainAltcoin.com

2019 Tips – How To Get High Dofollow Backlink From Reddit

Saturna Crypto Price (May 2021) Get Deep information!
Related Topics:
Up Next