An Unbiased Comparison between PS4 and PS4 Pro: Which One is Right for You?
Advertisement 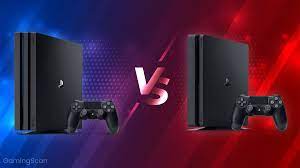 Sony has announced the release of a new and upgraded version of PS4 in the gaming world. The PlayStation 4 Pro was introduced on 7 September 2016 by Sony Interactive Entertainment (SIE). It is priced at 399 dollars, and will be officially released on 10 November 2016.

The main aim behind the launch of this updated model is to counter Microsoft’s Xbox One S and Project Scorpio. Another reason for the release of PS4 Pro is that, during E3 2016, Sony announced a new 4K gaming experience for its customers.

Some people may not be aware of these facts as well as the differences between PS4 and PS4 Pro (PlayStation 4 Pro), this article will provide all the information you need.

The most prominent modification PS4 Pro has over its predecessors is the graphics processor unit (GPU). This is definitely a good news for Gaming Freaks. It features 4.2 TFLOPS of processing power that is a huge improvement over 1.84 TFLOPS on standard line PlayStation 4 models.

Since the new PS4 Pro has an enhanced GPU which means that developers can use the extra power for anything they want within reason. Most will increase resolutions of games to make them sharper on 4K TVs, but that’s not all.

This upgrade also helps in game streaming and downloading, as well as playing games at higher frame rates. The GPU is made up of 36 compute units, which are clocked up to 911 MHz and provide a 3.4 TFLOPs performance. This updated model also incorporates 8 GB GDDR5 RAM, 128 GB/256 GB/512 GB flash memory storage and 1 TB hard drive.

Sony’s decision to include a standard 1TB HDD in PS4 Pro has left some gamers disappointed. The lack of 2TB is disappointing given the fact that more games are taking up greater space on your hard drive, and players will need extra storage for their additional content such as DLCs or back-ups.

However, just like in PS4, this can be resolved by either upgrading with another internal alternative or plugging an external USB 3.0 into one of its ports; giving you plenty of flexibility when it comes to expanding the console further down the road without needing to buy any hardware besides what came packaged originally.

Another aspect to look into while discussing PS4 Pro vs PS4 is size. The size of the PS4 Pro is also different from the older version. The new model has an overall length of 275 mm, width of 53 mm and a height of 295 mm. It is heavier than previous models by 100 grams and weighs 2.1 kg.

The PlayStation 4 Pro offers a dramatically different take on the console experience. It’s an upgrade in every sense of the word, with better graphics and increased processing power that will redefine how you play while still retaining compatibility with your old games from previous generations. Much like before though, it all hinges on whether developers choose to tap into these new capabilities or not over time; they have yet to do so for Sony’s PS4 Slim launch titles as well.

Sony says the PS4 Pro will deliver a 30% CPU and 100% GPU boost over its predecessors (PS4 and PS4 Slim), which means that gamers can spend more time in their favorite games without worrying about lag. The extra 1GB of RAM is specifically for non-gaming functions to make sure your gaming experience isn’t being interrupted by other applications running on your computer at any point during gameplay.

The color choices for this upgraded version are two, Jet Black or Glacier White. However, its controller has not been upgraded much apart from the light bar which is now a part of touch-pad. Although the new model comes with an improved controller, it does not have any speakers built into it unlike its predecessors.

Price is the most crucial thing to know about. The price of PS4 Pro may be higher than that of PS4 and previous models but experts on gaming industry claim that the extra money spent on this model will be worth it as Sony has claimed that this upgraded PS4 provides 4K graphics.

The executive vice president of PlayStation Brand Marketing, John Koller said “People are going to see games they’ve never seen before”, and also “I think we’re going to see a completely different level of experiences possible with the Pro.”

In conclusion, if you are a person who is looking for the best gaming experience and willing to spend some extra money then you should definitely go in for PS4 Pro. However, if price is your main concern and standard graphics are enough for you, then buying the latest version of PlayStation 4 will be better. Leave your comments below and tell us your experience with both models of PlayStation.

PS5 update fixes one of the console’s stupidest problems

Best cheap Xbox One deals and bundles for June 2021

New leak hints that Netflix may team up with PlayStation for gaming
Related Topics:
Up Next

Child tax credit check #2: Here’s how much stimulus money the IRS sent out on Friday