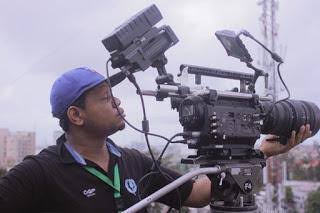 Originally, he was a performer and part of the group Business Men which toured the South-south as a duo. In time he switched to video directing.

Where is Adasa Cookey From

Adasa Cookey is from Opobo in Rivers State and grew in that state’s capital Port Harcourt.

While in Port Harcourt, he attained a degree in Architecture from Rivers State Science and Technology.

Furthermore, he obtained a Bachelors degree in Architecture and a Diploma in Producing for film from the New York Film Academy.

Adasa Cookey is the team leader at Squareball Media Productions Limited and it was founded in the year 2010.

His Professional job includes Burna Boy’s Like to Party in the year 2012.It was a very popular video at the time.

He has directed the videos (through his Squareball company) for ‘Adaobi’ in the year 2014 by the Mavins Record which attained fame. More still, DJ Exclusive’s ‘Wo Le’ featuring Davido in 2015 was his handwork.

It’s well known he is doing really great. But Adasa Cookey net worth isn’t officially published but estimated on blogs.

Moreover, as a Cinematographer, he is known for his ability to create appealing shots from almost nothing and achieve high production value.

Alpha P Biography, Age, Education, Wikipedia and Net Worth
Related Topics:
Up Next