Connect with us
Everyone desires liberty, but when some persons commit gross crime, they get secluded from others. One if this prison is nicknamed “The Gateway to the Fifth Circle of Hell”. Let journey through some of the very most populated prisons in the world.


BEWARE: THEIR ARE LOT OF MOST POPULATED PRISONS IN THE WORLD, BUT THIS IS OUR TOP5.
5.
Gitarama Central Prison, Rwanda.

Originally, the Gitarama Central Prison located at Rwanda was designed to hold about four hundred prisoners. But about the mid 1990s, it has over stretch it capacity and was holding about seven thousand prisoners.
This was especially because of the Rwanda genocide that took away many lives and the prison became the home of many.
Ill maintenance caused many to rot here. This place was known as hell on earth.
Imagine per square yard being occupied by four inmates.
This prison was just a fenced spaced with no roofs, forcing prisoners to stand for very long hours.
More crimes were recorded, even cannibalism.
4.
Sabaneta Prison, Maracaibo, Venezuela 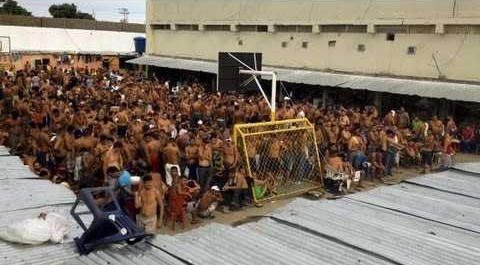 From physical abuse, gang violence, overcrowding and disease, The Sabaneta stands on our list as number three.
Globally, Venezuela has the world second highest rate in homicide, so you certainly know how congested here would be.
Humberto Prado, director of the Venezuelan Prison Observatory, says that 80 percent of Venezuelan prisons are actually run by armed inmates.
Reports says the Prisoners and Guards are in ratio 150:1.
Such a huge ratio.
The prison has a system of government called “The Gang-Controlled Hierarchy”. Low profile inmates are forced to pay to the top gang leaders to secure a place to sleep, and if they want water, many prisoners must drink straight from corroded bathroom pipes.
So I’ll..!!
As a result of such abhorrent abuse and dominance, riots have broken out time and time again in the prison’s bloodstained history.
In 1994, 108 prisoners were killed in a particularly brutal riot that left the prison scorched black.
In 2013, 16 inmates were killed during another brutal riot.
The perpetual war between rival gangs led to the beheading and gruesome dismemberment of several victims, and a follow-up raid found a large stockpile of assault rifles, grenades, and even endangered animals, which belonged to the “Pran,” the leaders of the prison hierarchy.
In the words of former Venezuelan president Hugo Chavez, Sabaneta is “The Gateway to the Fifth Circle of Hell.”
3.
KiriKiri Prison, Nigeria 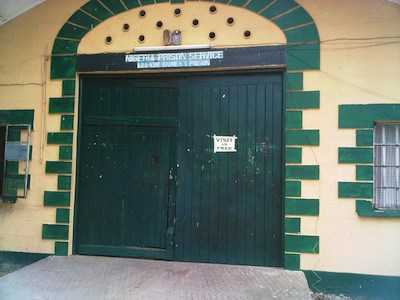 Kirikiri Maximum Security Prison located in Apapa, Lagos State, Nigeria.
First established in 1955, it’s official capacity was 1,056.
As of February 1, 1990 its official capacity was 956 but it actually had 1,645 prisoners. A 1995 report by the Canadian Immigration and Refugee Board stated that it was “already famous” for its overcrowding.
Some death row inmates are held at Kirikiri.
As of March 2018, the prison held approximately 5,000 prisoners, 3,700 of whom had been awaiting trial for five years or more, an estimate shows that 70% prisoners here have not being tried yet.
It is a big house for some of Nigerian big elites which includes:
Chief Bode George
Al-Mustapha
Major General Shehu Musa Yar’Adua
Fela Anikulapo Kuti
Olusegun obasanjo
2.
LA Sante Prison.

So unfortunate it on this list, but the activities carried on this prison got it on our number two.
LA Sante prison is located at Paris,  France. It is popular know for it’s brutality.
Imagine inmates taking their own life rather than serving their jail terms.
That the even in the year 1999 when a hundred and twenty four prisoners took their own lives.
Within this prison, a hierarchy is formed, making some so powerful, influential and dominant over others.
While those in the prison poor category serves as slaves and servant, making it inhospitable for them.
Vio
1.
Black Dolphin Prison, Russia.

The last on our list finally arrived. Does the name gives you any idea what happening inside?
Store your imaginations and join us explore.
The black dolphin prison, not so so much know for it population. Rather, for it Formost brutality.
See why it’s our number one. Only the worst and worst of all criminals are sent here. The lists includes top criminals, murderers, rapist, pedophiles and even cannibals.
From the types of criminals convicted here, it obvious the guides to be here must have a similar heart, They are all brutal.
The prisoners never sit nor rest for 24 hours until it time to sleep. Imagine being blindfolded and punished half a day for hours, that the event here.
Only those sentenced for life are sent here, so it pain, torture and suffering till the day of death in this prison.
Thanks for reading, Please Share and Comment.

Top5 Most Dangerous Prisons In The World